On Thursday, November 29th, Peace Boat US interns and staff members attended the United Nations Academic Impact 2018 J. Michael Adams Lecture and Conversation, “Why 1999 Matters in 2020: A Conversation on The Hague Appeal for Peace Conference and the UN at 75”. The event consisted of a panel of inspiring speakers including Susan Adams, Nyuon Susan Sebit, and keynote speaker Cora Weiss, the President of the Hague Appeal for Peace as well as a Peace Boat US Board Member.

Panelists discussed higher education as a bridge for peace and how to work with member schools in regards to the UN Sustainable Development Goals (SDGs) to encourage positive climate action, gender equality, and access to education. Cora Weiss emphasized the SDGs and called for a peaceful society that views the SDGs as interconnected blocks instead of separate ideas. In addition, Weiss suggested the launch of a new campaign to appeal for peace and the scourge of war for the year 2020, for the 75th anniversary of the UN. To view issues holistically, Weiss suggests adding disarmament and peace education to the SDGs, and went on to state, “to reach peace we have to teach peace.” The final panelist,  Nyuon Susan Sebit, a human rights lawyer from South Sudan, was an example for women being a part of decision making and peace building process. Further emphasizing Weiss’s statement–“if there are no women, there is no peace.” All panelists were adamant for community participation, and a call for women in decision making on all levels with access to global education. To close the panel, Weiss stated that we have to “work hard as if our future depends on it, because it does.” 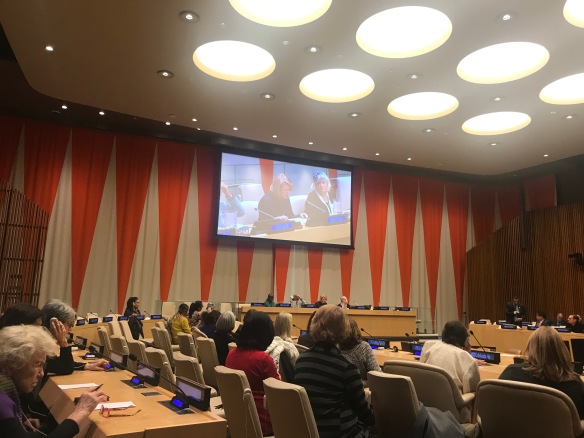 This article was written by